Natural History Museum, Museum of the History of Science, Oxford, 2016

In March 2016, I collaborated with Cristiana Vagnoni to develop a public engagement stall – Brain Power! – as part of Brain Awareness Week. It ran at the Natural History Museum, and at the Museum of the History of Science, with support from Oxford Neuroscience. We recruited fellow researchers to act as demonstrators alongside myself and Cristiana during the events: Luiz Guidi, Cristina Villa del Campo, Eelke Spaak, Dante Wasmuht, and Clio Korn.

Although neuroscience often appears in the media, the consumer of such media typically has little understanding of how the brain works, even at a very rudimentary level, and even less of an idea about how scientists study it. For example:

What does it mean that neurons have electrical activity? What does “recording” this activity look like? The description is there but a tangible explanation is missing.

Our stall had three broad aims:

We divided our stall into three sections:

Introduction to the nervous system

Before visitors engaged in the experiments, we wanted to equip them with the very rough basics of neuroscience, to ground their experimental observations in some context. The aim was for them to get a sense of how neurons communicate, and then have an “a-ha!” moment during the experiments, when they observed these principles in action.

The introduction to the nervous system caught the public's eye through our display of anatomical brain models. We invited them to explore the brain in their hands and to get curious about it by asking questions: “what is the brain made of? what do neurons look like?” We also made several laminated pictures available to pick up and explore, as talking points and examples:

How do neurons interact? We designed a simplified cartoon poster explaining the parts of a neuron and how it uses these parts to talk to its neighbours through electro-chemical communication. 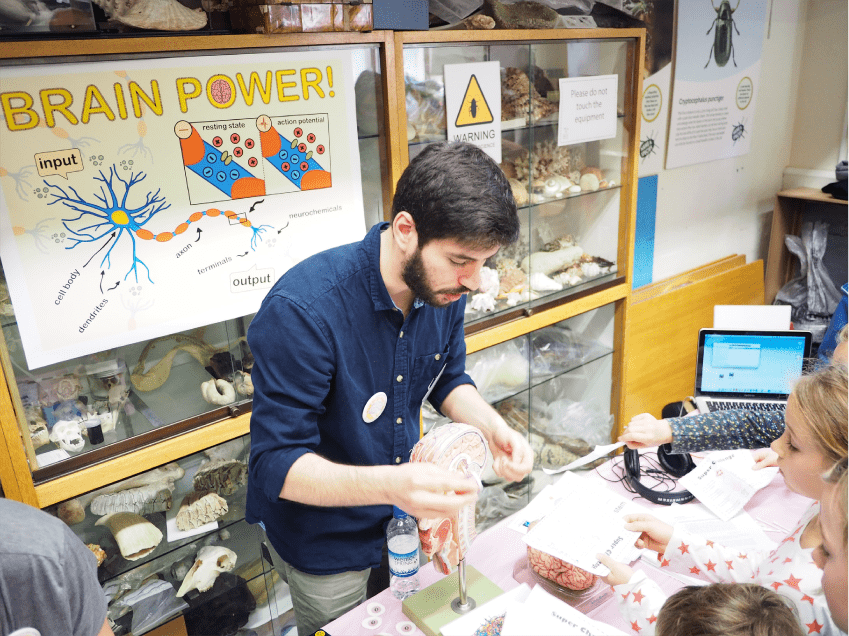 After introducing visitors to these concepts, we guided them to the hands-on experiments by hinting that there may be a way to test these principles and see them in action.

This experiment relied on the Neuron Spikerbox kit developed by Backyard Brains, a company that is at the cutting edge of (neuro)science communication. This is an elegantly simple kit which allows anybody to directly record neural activity in insects such as grasshoppers and cockroaches. It consists of a small amplifier, battery, recording and stimulation cables (attached to metal pins), and computer/smartphone interface cables. 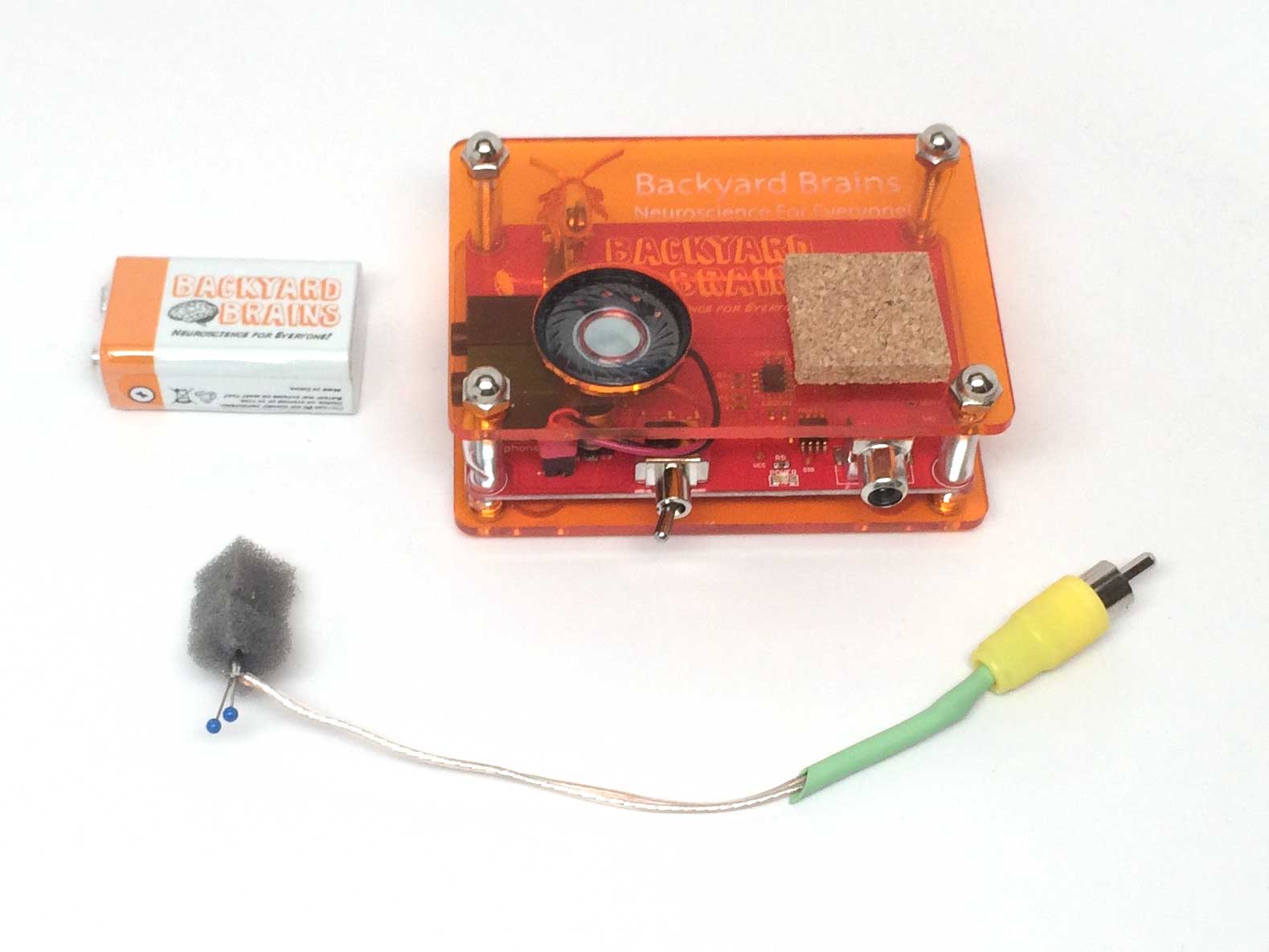 In our experiment, the recording pin is inserted into a cockroach leg, in an area through which many neurons pass: keeping this pin there, one can see a steady stream of electrical activity flowing across the display monitor. If the hairs on the leg are brushed – hairs that the cockroach uses to sense its environment – the steady stream of activity becomes punctuated by sharp bursts of electrical impulses: action potentials generated by neurons in response to the brushing.

This technique, using small pins (i.e., electrodes) to record neural activity directly from neurons, is at the heart of neuroscience. It allows one to see, with their own eyes, the fundamental unit of nervous system activity: the action potential. In our setup, visitors used a magnifying glass to observe the tiny hairs on the cockroach leg. They were encouraged to brush the hairs and observe the live neural response on the monitor: direct evidence of how sensory information is coded using electrical signals! We also performed the reverse experiment, using electrical current from the laptop to stimulate the leg and activate the neuromuscular system, making the leg “dance”. We thereby illustrated that neurons also use electricity to activate muscles and create movement, a point which links neatly to the next experiment.

To further demystify neuroscience and to make it more relevant to visitors, we guided them to the last activity, which demonstrated the above principles directly, using their own bodies. In the human-human interface experiment, also supplied by Backyard Brains, we used a skin electrode to record the electrical activity in the forearm muscle of one volunteer, amplified this activity, and used it to electrically stimulate the nerve in the forearm of another volunteer. This (harmlessly) activated the muscle and made their fingers twitch – a strange and funny, but not painful, sensation. Essentially, one person's intentional muscle movement controlled the nerve (and muscle) of another, demonstrating that all nervous systems, including ours, use electrical activity to communicate. Anxious visitors also had the option to observe our demonstrators perform the experiment, instead of actively participating. 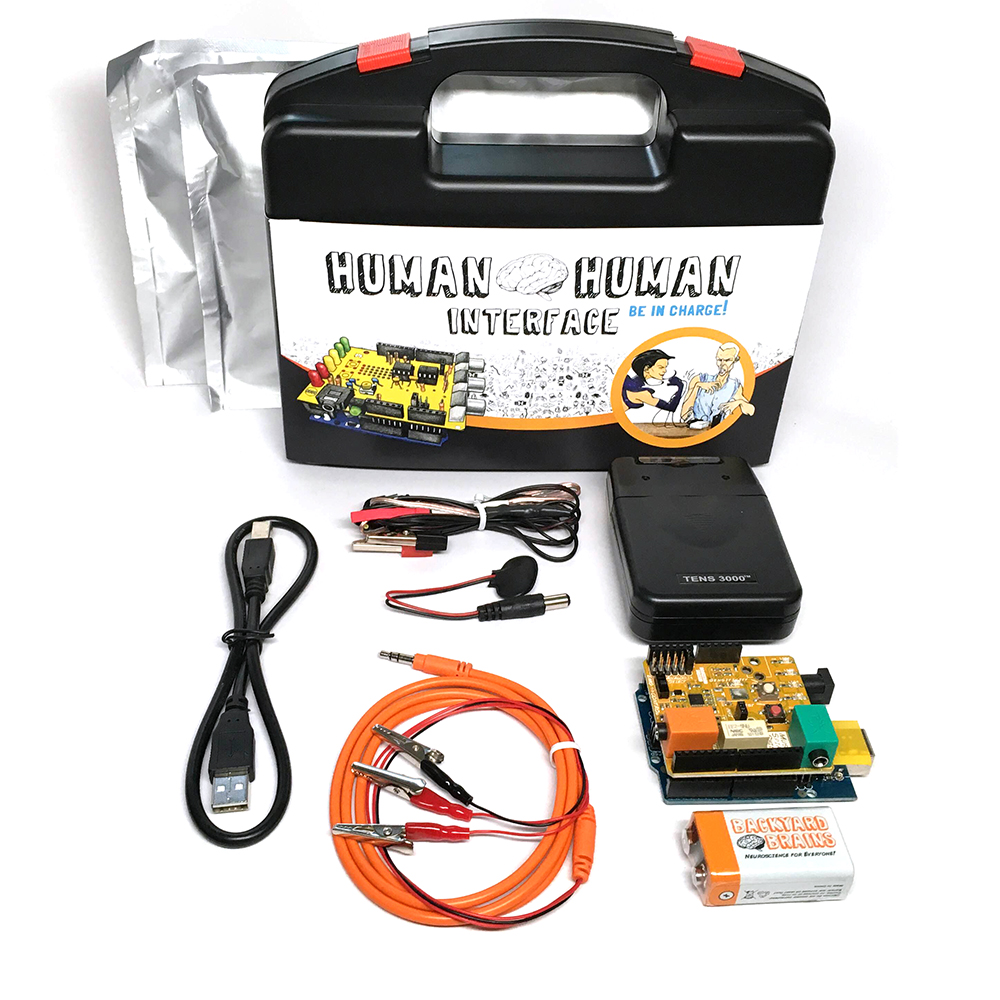 This demo was an important complement to the cockroach leg experiment, not only relating the two animal species through basic principles of neurophysiology, but also emphasising that neuroscience benefits from the study of model organisms at different levels. Equally important for public engagement, this was a particularly exciting activity for families, as kids could see how much muscle contraction they needed to “take control” of their parents' limbs, while parents found the twitching sensation curiously entertaining. 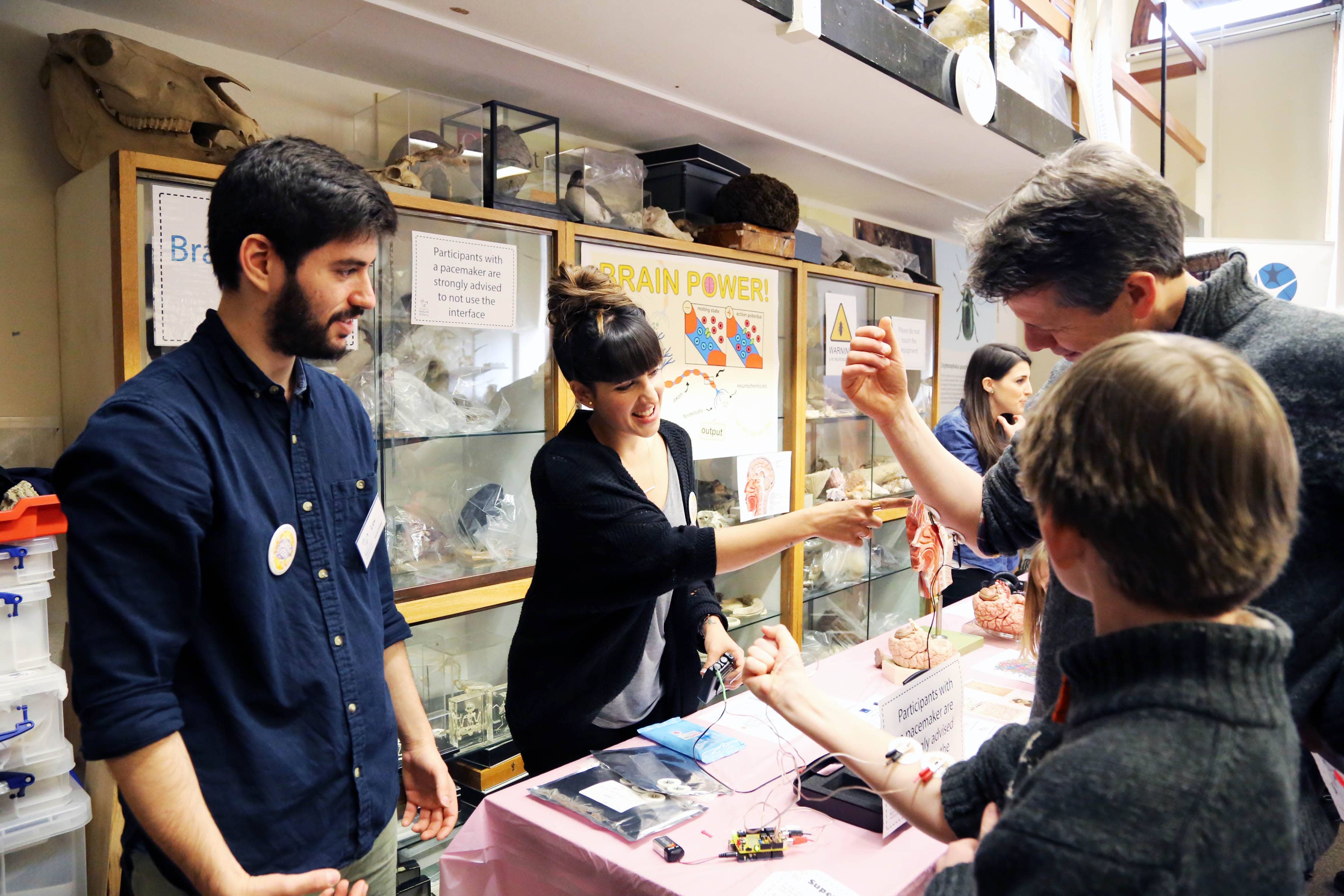 Children, parents, and young adults alike were fascinated by the experiments and were eager to take part and to try things for themselves. Almost all visitors took the time to go through all activities, and many stuck around to ask questions about neuroscience and research at the University of Oxford. The feedback we collected from the public certainly confirmed our positive experiences during the day, and strengthened our belief that scientists should not shy away from making their methods accessible to the public:

Of course, we were not perfect and sometimes constrained by our resources. Sometimes we included too much information, and sometimes it was too crowded or too noisy. Some visitors would even have liked something bigger than a cockroach leg!